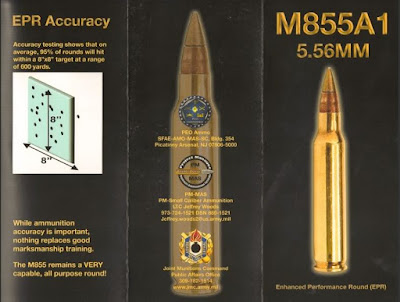 There seems to be a lot of talk about the effectiveness of the new M855A1 round ever since its development. There have been reports that argue its lethality, penetration, accuracy and compatibility with the current fleet of service M4s. I just don't think that I buy into these arguments! You cannot argue that the M855A1 has better terminal performance and a better flight path than its predecessor. It has a longer maximum effective range and better accuracy.

The major complaint seems to come more from its cost of manufacture, which really is a moot point when compared to some of the financial decisions the current Government administration has made over the past year or so! When compared to the cost of an Aircraft Carrier the M855A1 is pretty cheap. The Government has spent a lot more money on lemons in the past that no body noticed yet everyone wants to have a crack at this project?

Elements of the Australian Military have been using M855A1 for an extensive period in theater with excellent results. It's reliable with accuracy out to 900 meters in a range environment and terminal engagements out to 600m.

The issues relating to the increased chamber pressures are yet to be seen, I have not heard any problems associated with feed-ramp wear, bolt breakage or barrel wear. Only time will tell.

Lack of availability of the 70 grain brown tip ammo is a significant issue for most whereas M855A1 is in abundant supply.

U.S Army personnel will be issued this round when deployed in theater. Soldiers should have confidence that the round will perform to the required standard.

Marksmanship and human error is always a bigger issue for our troops. We need to ensure that we focus on combat marksmanship training and shot placement rather than relying on the advancement of bullet technology doing all the work.