The Redback One Shooting System: The High Mounted Optic

The Redback One Shooting System:

I get asked all the time why I have my Aimpoint set on such a high mount? So I thought that I would write a piece on the Redback One methodology and how that relates to our shooting system and weapons set up.

There are several reasons for setting the combat optic on a high riser block and here they are.

Mitigation of muscular fatigue: The neck. Having a low mounted optic on the rifle forces the shooter to extend the head forward and down in order to acquire the sight picture. This places excessive stress on the trapezius and sternoclidomastoid muscles as they run through the upper part of the neck. Mounting the sight on a high riser block alleviates this stress by keeping the head in a more neutral position and allows the shooter to conduct long clearances more comfortably.

Mitigating muscular fatigue. The eye. By placing the optic low on the rifle and angling the head forward places a high amount of stress on the superior rectus muscle of the eye. This is an extraocular muscle that is innovated by the oculomotor nerve. The superior rectus primary function is elevation and is in its primary position while looking straight ahead. By mounting the combat optic on a high riser block, the shooter can maintain the superior rectus in as close to its neutral position as possible. This not only minimizes stress and fatigue of the eye but also allows the eye to maintain a greater range of motion, which is vital to proper scanning procedures during room combat. 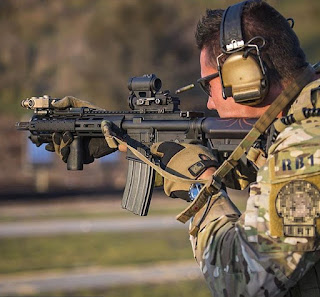 Rearward Mounting and Butt-stock Position. Mounting the sight as far to the rear as possible allows the shooter to maximize the field of view provided by the combat optic. As the Aimpoint Micro is a technically more difficult sight to use due to the restricted field of view compared to other sights on the market, it requires the shooter to be more consistent with rifle presentations and mounting procedures. In order to achieve a more ‘head up’ shooting position the butt-stock must be collapsed to ensure that eye relief can be maintained and mounting speed can be maximized.

Faster Sight Acquisition and Shots on Target. Placing the combat optic on a high riser block means that the shooter has a shorter distance to move the weapon and achieve the mounted shooting position than when setting the sight on a lower mount. Traveling a shorter distance during presentation translates into faster sight acquisition, and also means faster rounds on target. 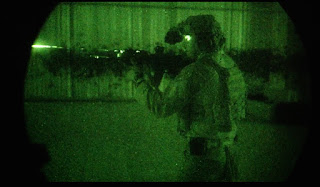 Night Vision Operations. When employing night vision goggles there will likely be times when the shooter will need to use either the day combat optic with the naked eye or passively sight the rifle by using the NVG behind the combat optic. Two occasions that might occur are when or if the aiming laser fails, or when operating in an environment where there is a belief that the enemy possesses a night fighting capability. In order to achieve either method of targeting while wearing NVG’s, the shooters head must remain in a neutral and upright position. 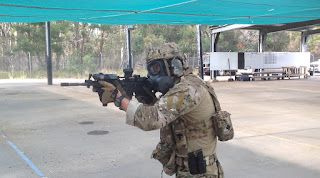 Gas Mask Operations. In order to be able to quickly mount and target the rifle while using the protective gas mask, the combat optic must be raised to ensure that the weapon is presented naturally and not canted to one side. Having the combat optic mounted low on the rail makes it extremely difficult to sight the weapon making target engagements slower and potentially less accurate. This also places the head in an unnatural position while shooting which is again counter productive to this technique.

Potential Negatives. There is an argument that could be made to suggest that without a low, deep solid cheek weld on the butt-stock that recoil management could suffer which will affect accuracy. That argument is partly true if the shooter does not fully understand recoil management and how to can be mitigated, which is beyond the scope of this article. Suffice to say that I do not have any issues with recoil management.

There is also an argument that the mechanical offset is too much and is detrimental to accuracy in CQB operations. This is quit a small point really as there is always some mechanical offset and must be trained during individual skills training at the range. I always ensure to include an offset in every drill that I shoot during CQB shooting evolutions regardless of the size of the target. I know exactly where I need to aim to achieve the shot placement I need to maximum incapacitation. Our Operator Readiness Test is a fantastic assessment of speed and accuracy which requires the shooter to place 12 rounds of carbine and 12 rounds of pistol inside a six-inch circle with one hundred percent accuracy with both the pistol and carbine from a distance of 7 yards in a time frame of 20 seconds. Being able to perform these speed and accuracy requirements means that your ability to include an offset under stress has been assessed.

Conclusion. In closing, there are many advantages to mounting the combat optic on a high riser block that clearly out weight the perceived disadvantages as I have outlined above. The Redback One Shooting System has been designed to compliment our close quarters battle and target prosecution courses and seamlessly mesh with CQB TTP’s. If you haven’t tried it out, give it go and see what you think. It may require you to retrain some preexisting neural pathways from legacy techniques but once you overcome them you likely won’t go back.

For more information on our training programs please feel free to contact us directly.

About the Author – Jason Falla is a former member of Australian Special Operations Command, now Director of Training at Redback One. Jason is a decorated veteran of OIF and OEF with multiple combat deployments to multiple war zones.